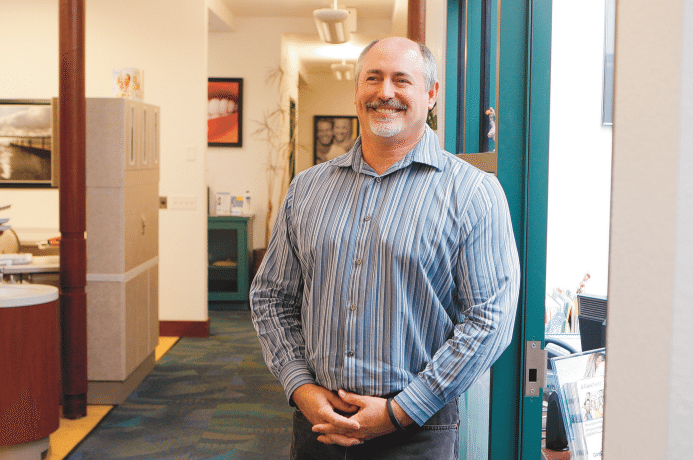 It’s time to retire that old image of a dentist pulling teeth with glorified pliers. In fact, most dentists today rarely need to pull teeth. The practice of dentistry has improved to the point where almost every tooth can be repaired or saved, says Eugene dentist Dr. Kirt Kirchmeier of North Eugene Family Dental.

“Prevention is huge,” he says. “If we can never touch that tooth, that’s really what we want,” he says. But if repair or some other kind of intervention is needed, his office in the Coburg Road area is ready. “Nowadays you can save almost any tooth, and the importance of that has become more and more apparent over time, just because the true functionality of a natural tooth is so much higher than what we can replace it with,” Kirchmeier says. “A tooth that gets broken or worn down over time can be rebuilt back to its former strength to last for many years, if not a lifetime. The aesthetics and strength has gotten a lot better.”

Kirchmeier keeps a stash of apples and oranges in his office that he munches on every day until lunchtime. “I’m a big apple-a-day guy,” he says. He’s also a big loves-to-work-with his-hands guy. Before graduating from the Oregon Health Sciences School of Dentistry in Portland, Kirchmeier grew up in Red Bluff, Calif., where he had his own mechanic and automotive machine shop.

“We machined parts, so that side of it is very similar to what we’re doing inside of a tooth,” he says, smiling. That love for precision work with his hands is still a big part of Kirchmeier’s practice. Unlike many dentists who refer work to other specialists, such as for root canals, extractions and implants, Kirchmeier does all of that in-house.

He says that specialists are very good at what they do, but he wants to be the care provider for his patients, not send them away during a time of need. He works with all ages of patients, including children. “I just try, I truly try, to be their care provider,” Kirchmeier says. “I’m here to take care of their mouths as best I can. I try to do as much of the work as I can here so patients come and they get comfortable here. They get to know our employees and how we do business.”

Kirchmeier started his practice in Bend after graduating from dental school in 1997. A skier, he was right at home in Bend and remained there for 10 years. When his wife, Cindy, wanted to pursue her education in Eugene, the plan was for her and their daughter to commute back and forth from Bend. Instead, Kirchmeier commuted, living in Bend three days a week and Eugene four days a week. “That wasn’t working,” he recalls, so he sold his Bend practice to an associate and came to Eugene in 2007.

It wasn’t long before Kirchmeier and his family decided that Eugene was the right place for them, though at first they thought it might not be a permanent move. “We weren’t sure if we were going to stay in Eugene because our daughter was graduating and we thought, ‘Well, we’ll go wherever we feel like.’” Kimberle now does their data entry for the dental clinic, and Cindy is the office manager. “I like the weather (in Eugene),” Kirchmeier says, “and the proximity. We like to go to the coast, to Portland and Central Oregon. And then — I have to admit — we really got hooked on Oregon Duck sports: baseball, basketball, football, volleyball, softball, all of it.”

Last but not least, the doctor and his family moved into a great neighborhood where the family became close friends with neighbors. “We thought, ‘You know, you don’t get that very often.’”

Part of the friendly, neighborhood approach to his work is to be available every day of the week. Employees alternate their days off, so the office is closed every other Monday and every other Friday. “We’ve always felt that was important,” he says. “I’ve always worked Fridays because it’s such a convenient day for people. Friday is that one day that patients don’t work or it’s easier to take off.”

Patient Philosophy
Kirchmeier says that sometimes the practice of dentistry becomes about what the dentist wants to do. But not for him. “I really try to approach it as truly like I’m a healthcare practitioner,” he says. “I’m here to keep their mouths healthy and keep them healthy, yet do things that work for them. It’s really trying to get the smile the patients want.”

This article ran in the Register Guard Aug 8 2013.